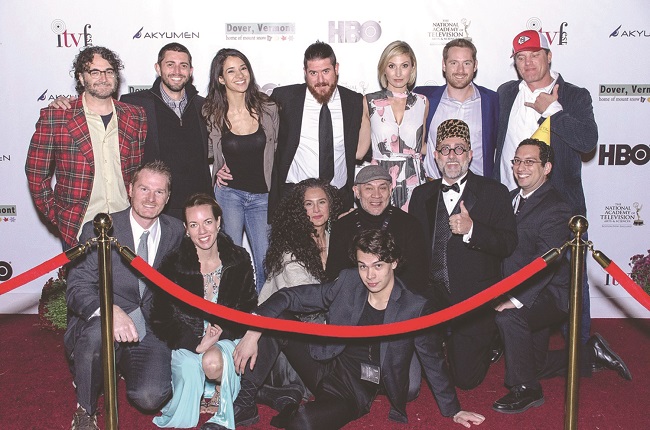 Here’s the formula–extend an open invitation to thousands of television fans worldwide and ask a group of highly talented international and U.S. artists to screen their latest TV and short film projects, and then top that with a cadre of hard-to-get television executives. Put them all together in Manchester, Vermont, in October, and, yes, let them all watch television shows with each other. To be precise, let them watch five days and nights of shows and web series they would otherwise never see. Exposure–that’s the name of this game.

Sounds so simple, and if you’ve been to the annual Independent Television Festival in past years, then you already know that this is one of the most brilliant celebrations of small-screen entertainment anywhere in the nation. The feature film industry, both Hollywood and indie, has long luxuriated in the prestige of Cannes, Sundance, Tribeca, and others like them, and by adapting that same “jamboree of the best of the best” format to give awards to outstanding productions in television and indie projects, the ITVFest has been making an impact on which kinds of shows you have been watching (and hoarding your DVR). If you are already hyper-curious, then you can jump right now to the ITVFest archive online and get a taste of the high-quality projects that are selected for the festival by watching trailers and full episodes of many of the past winners. (Oh, go ahead–we’ll wait.)

Founded in 2006, and debuted in Los Angeles, ITVFest later moved east, when Philip Gilpin Jr. became the event’s executive director in 2013. Now in its fifth season in this state, Gilpin, a Vermont resident, banks on the fact that the extraordinarily beautiful setting amidst the autumn glory of the state’s most colorful season adds to the feeling that the event is “the Sundance of independent television.” Having flown in from the West Coast to attend ITVFest one year, Liz Shannon Miller, a L.A.-based IndieWIRE editor wrote, “You’d step outside and be in rural Vermont …. Which, to be clear, is not a bad thing.”

“We are the only festival that focuses exclusively on independently produced projects for television,” says Gilpin. “As executive director, most of what I do is explain to people that this is not a film festival–it is a television festival.” Increasingly competitive, this year, the festival’s goal is to draw 750 submissions, which are likely to come from about 30 countries. “It takes the festival staff, our committees, and associates several months to watch everything that comes in. About 75 projects will be publicly shown during the festival,” he says. In addition to the screenings, the festival schedule includes panel discussions and speakers on key topics and emerging trends in television and internet programming.

“All kinds of people who have a passion for television show up at the same time,” he says, “and the synergy is incredible.” Since moving the festival to Vermont, he has noticed deeper, more meaningful connections among the artists, top media executives, and the participating public. “Last year, for instance,” he says, “an HBO executive, a person whose office no young artist would ever be able to just walk into, was sitting outside under a maple tree talking to people about their ideas for new programming.”

When it comes to independently produced television pilots and web series content, that has been the catch-22–a great many writers, directors, and producers know how to create outstanding documentaries, dramas, and comedies, but no one can bet that their work will be seen by anyone but their former grad school professors and their BFFs. That’s where ITVFest changes the game. The winners are chosen based on the ballots cast by the audiences who come to the screenings, and meanwhile, the network buyers and online streamers are right there with everyone else taking notes on which kinds of programming those viewers want to watch.

“There were thousands of talented, but unknown artists trying to break into the television industry,” Gilpin says, “and when YouTube launched and other self-distribution platforms were suddenly available on the internet, these artists gained a worldwide audience of tens of millions of people almost overnight. At ITVFest, we put the most talented artists among them front and center for the public, as well as for the industry. Most of what we do is activism for artists. We are supporting and growing new careers in television and for online outlets.”

Scoop this! We’re not necessarily hinting that they are oh-so tardy to recognize the excellence of non-cinema programming, but it was recently reported that Cannes, too, wants a television festival by 2018. Nice idea. However, diehard viewers already know what’s chic in indie television is not on the French Riviera–it’s already happening right here and right now in Manchester, a charming New England village tucked beneath the 3,840-foot peak of the utterly scenic Equinox Mountain.

The deadline for ITVFest submissions across 10 categories, covering television, web series, and short video is July 5, 2017. All genres are welcome except horror-slasher. ITVFest is a 501(c)3 nonprofit corporation.

This year’s ITVFest is Wednesday, October 11 to Sunday, October 15 in Manchester, Vermont. Sign up for a free email newsletter to get the latest schedule of screenings, red carpet invites, ticket info, and festival news at www.itvfest.com. Why not become a festival volunteer or intern and enjoy the perks of being a real insider? We hear there’s swag!